I have requested a badge if I can make it a full year!

“There are some things we don’t want to know. Important things.”

Ned doesn’t want to know about men’s health. Don’t be like Ned. Today I did yoga. Yup. There. I said it.

“We can rebuild him. We have the technology. We can make him better, than he was. Better, stronger, faster.”

It’s been a little over ten months since I was last knocked out with a chest infection.

School had broken up for our Christmas holiday. A bunch of us had taken part in an ‘come and sing’ of Handel’s Messiah - to celebrate the retirement of our Rector of over a decade. I am not sure if the piece was picked due to it’s popularity or the implied relevance of the title. Either way. A romp was had.

I don’t know if patient zero was a colleague or a pupil at school, or perhaps a parent. It could be that the source was actually sharing the lung capacities of my fellow choristers, or perhaps a chance encounter on my limited travels of the preceding days. Or maybe it was me.

Whatever the case, the Winter Solstice was the very next day, and the start of it. Holidays were over before they truly began.

As our planet hurtles around that great ball of fire in the sky towards another solstice, one year on, I have only been in work for 39 days. Now, in the strangest of years that is perhaps not that unusual. After all, schools were closed here from March until August anyway. But I have been working from home since a little before lockdown, and now well beyond.

In these last 315 days I have successfully neglected many things. With some gusto, but without intent. I had enough to do most days just keeping on top of work and keeping awake. I have had waves of energy which has allowed to me do a little bit of exercise and a little bit of gardening. These bouts of enthusiasm have come and gone like the tides - well, without the water, or the predictability.1

Most frustratingly, I have lacked the mental acuity to think. This has brought the blessing of allowing me to give up on being any kind of completionist. But the reading has suffered, as has the odd side project like working through the #100DaysOfSwiftUI. Replaced by such intellectual pursuits as watching the entire Marvel Cinematic Universe in chronological order. I do not recommend it.

I have struggled with extreme physical and mental fatigue. And while I have now been at the point, two or three times, when I feel there is a light at the end of the current tunnel; every time it has turned out to be a train coming in the other direction. Wile E. Coyote and me, we have a connection.

So there is another light. I am beginning to sense some activity in my grey matter. I have actually been reading books again. I started with the familiarity of Frank Herbert’s Dune, a nostalgic journey to past times prompted by the upcoming movie release. I have thoughts, but perhaps that’s a whole other story or two. And now I am on Jackie Kay’s Red Dust Road inspired by our new Rector’s2 Summer Book Challenge - I am finally catching up, with the challenge and with my ability to consume text.

And with signs of life showing in the ageing corpse-to-be that has been conscripted into carrying my grey matter around, I have signed up for the extended free trial of The Sufferfest in order to give their Transition Up training plan a go. Optimism? Perhaps? But without optimism, what do we have?

Here’s to the end of fatigue. Even better: I was allowed to reciprocate

We both survived. Every challenge provides opportunity.

My GP called me today, and recommended that I “shield” for the next 12 weeks. That means not leaving my home at all. Until July.

I wonder how many of us have truly thought what it means to be obese?

Of course I am sure, like me, most people have long had a loose understanding of obesity. It is a term that we could hardly be unaware of. There are countless news reports on the subject, often quoting studies into the ill-effects on our health that can manifest from obesity or discussing some current or future obesity epidemic.

Even the smallest effort placed into actually reading about this topic, demonstrates the extent of the issue. According to Scottish Government statistics:

The numbers may well be different in your country, but at the time of writing the most up-to-date figures from the World Health Organisation reveal there are more than 600 million obese adults worldwide, and a McKinsey Global Institute report estimates the annual economic impact of obesity as US$ 2 trillion.

However, if I am honest, I have long known about this wider context. I have always just thought of obesity as a problem for other people - you know, governments who have to pick up the health bill, and all those obese folk!

So, what is obesity? Essentially a person that carries enough excess body fat that it has a detrimental effect on their health is considered obese. Typically a person’s relative weight is classified using their Body Mass Index (BMI).

BMI is defined as the ratio: BMI = height in metres / (weight in kilograms)2

There are many online tools which will calculate your BMI for you, including converting from imperial units if that is more your thing.

An individual’s BMI is generally classified as follows:

Note: this does not apply universally, some countries have different classifications to suit differences in their populations, e.g. in Japan, a BMI of 25 or greater is considered obese.

Without any real planning I have unexpectedly stumbled into middle-age. My jobs, at least since I hit my 20s, have been essentially sedentary - as much as a teacher stands up or walks around, let’s not get carried away by thinking that is exercise. And I haven’t really kept up with the trend towards standing desks (or even treadmill desks, yup you read that correctly) that the development community have now embraced for some time.

I don’t climb as many hills as I used to, and cycling had become a distant memory. I might be carrying a few extra pounds (even as I type ‘pounds’ it sounds less than ‘kilograms’). But obese? Come on now, that’s for all those obese folk, remember? 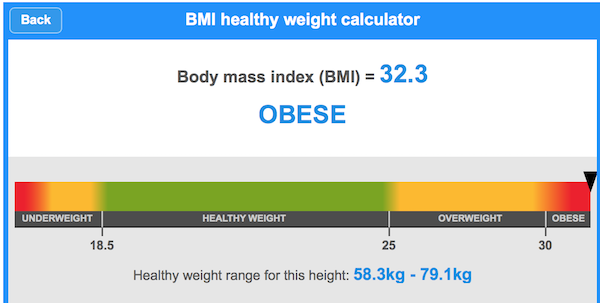 And there it was. Obese. In actual fact I weighed in at 101.8 Kg (a little over 16 stones in old money). And according to guidelines I should be no more than 79 Kg. Obesity was no longer some naive idea of a much heavier version of myself, rather it was something much more prevalent and significantly closer to home than I had thought to imagine.

So now I have a problem I didn’t think I had before. Or a set of problems. A greater risk of heart disease, stroke, diabetes, a variety of cancers, and a host of other ailments that a quick Google search will be happy to list.

And about now, if you have not already worked it out, I should really include a disclaimer:

I am not a medical professional. If you are concerned you have a medical condition, including being overweight or obese, you should consult a doctor.

At least I had a suggested solution. I only needed to lose 22.8 Kg (or almost 4 stones, which sounds just a wee bit more than that “few extra pounds”).

Anyone can eat a bit less, or a bit healthier. Anyone can join a gym, or take up parkour. But whatever is started needs to be sustained. Sustained through cold, damp Winter days when you just can’t face leaping off of rooftops or somersaulting over railings2.

I knew I needed to to do two things on top of simply changing my diet and activity levels:

These would allow me to monitor progress, as well as provide meaningful feedback on my performance towards my goal(s) in order to provide ongoing motivation.

The broad goal I already knew: a target weight. The smaller, intermittent goals are more appropriately the subject of a discussion in their own right, but they needed to work towards that final goal state.

The tracking was easy, and also might benefit from more in depth discussion. I tracked my food intake with the MyFitnessPal service, using their iPhone app (although I understand they support other platforms). A newly acquired Apple Watch proved to be invaluable at tracking exercise as well as general activity throughout each day.

Almost six months in and I still not done. Although, my next challenge will no doubt be coming to terms with the fact that I can never be “done”. But in those months I have managed to chip away at two-thirds of my goal:

The graph shows the rate of weight loss decreasing. Partly, no doubt, because the process gets harder the nearer to the goal I get, but also because it is just that bit more of a chore to tackle this problem alongside a hectic Winter Term at school - which leads to a final observation for this post…

Health and wellbeing is increasingly at the forefront of corporate interest and now the subject of government scrutiny. The impact of a workforce in poor health is absenteeism and lower performance.

In education, there has rightly been an increasing focus on the health and wellbeing of our students in recent years - both in terms of pastoral care and in the curriculum. This has begun to extend to governments and schools understanding that the wellbeing of their teachers is just as vital. It seems somewhat self-evident to me that as we entrust the safety and happiness of our children to the teaching profession it is essential that the profession is itself awash with teachers who feel safe and happy. Again, perhaps, a discussion for another day.

Off to see what hifi equipment Robert Ritchie is selling these days. Perhaps I should leave my wallet at home… Or my wife…